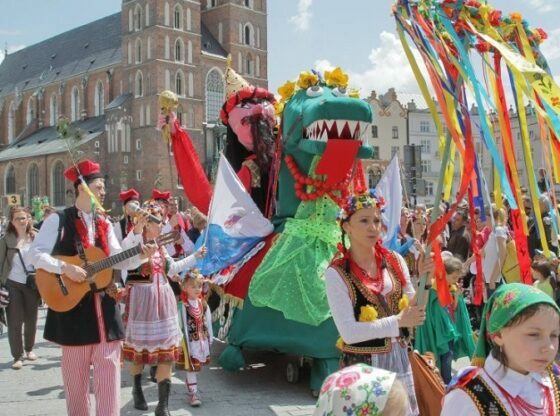 There is not a single day that goes by without a festival, exhibition or event happening in Krakow. Cultural events galore in Krakow involving the arts, music, culinary, literature, folklore and sport attended by people from all over the world. Here are some Krakow’s most spectacular and high profile festivals for you to include on your visit to Krakow.

The majority of festivals take place on the main square called Rynek, this Medieval piazza is Europe’s largest square with over 4,000m2 available to festival organisers and visitors. Some festivals incorporate various parts of Krakow’s city centre offering specialised attractions of the festival in question. The square is also home to an underground museum displaying Krakow’s history through the centuries. It is free to enter during the Night of Museums event in May as are further museums in and around Krakow and as the title suggests they remain open till late.

The famous Christmas Market held on Rynek sees the local artisans set up stalls to sell their handmade products to the public which range from carpentry and woodwork items, leather, wool and sheepskin induments, jewellery, pottery and Christmas decorative articles. Let’s not forget the regional foodstuffs available and mulled wine. The New Year Concert follows on from the Christmas Market Fair which is transmitted live on TV and brings in large swathes of visitors celebrating on New Year’s Eve with national and international artists appearing on stage. The Christmas Fair runs from the end of November to January 6th, however, after Boxing Day the Christmas part is changed to New Year, naturally. The next biggest event is the Easter Market on Rynek to celebrate the Easter period which is highly respected and important in Polish culture. Once again the rustic wooden stalls are erected to offer their wares both local and national artisans flock to Krakow for the venerable occasion. This time you will see the hand painted eggs, embroidered linen products and wicker work along with some of the earlier Christmas Market items. Spring is in the air and so flower stalls making complimentary Easter bouquets. The food stands are back to and so is the ever popular mulled wine to sip on. The Easter Fair commences a week before Good Friday and ends 10 days later. On a more cultural aspect the Misteria Paschalia Festival runs simultaneously with the Easter celebrations and features classical music concerts originally written by Medieval nuns in the Krakow Philharmonic Theatre Hall as well as churches in the surrounding area. The concerts are broadcast to many countries as this festival has deep historical connections with other Catholic faith nations.

Moving into Spring and the Summer periods Krakow has some really spectacular events on the calendar and to begin with the students Juwenalia Festival, this 3 day celebration which began in the 15th century allows the students to take charge of the city, the Lord Mayor symbolically hands over the proverbial keys to the city of Krakow. 30,000 students that frequent the universities can practically do as they please within reason, so, music, parties, fancy dress, offbeat sport-like challenges between rival faculties which all starts with a big show on Rynek where all the students congregate to receive the keys. This colourful and crazy 3 day giant party is in May every year and well worth attending especially if you are a student even from abroad. In June the exquisite and poignant celebration of the Wianki Festival, this translates to the Wreath Floating festival. It is an annual midsummer event that was revived in 1992 after the return of independence from the Soviet era, locals and visitors gather on the banks of the Vistula River below Wawel Castle to float flower garlands lit by candles on the river. This Pagan tradition was a ritual where young maidens would release their garland and hope to find true love with the young men further downstream would attempt to catch one of the floating wreaths and therefore acquire his bride to be. Wianki in modern times honours this tradition but also includes music concerts and a huge firework display from boats on the river. The music concerts sponsored by the Krakow council are in different venues in the city and many well-known Polish and international artists participate. In the same month the internationally acclaimed Jewish Culture Festival, Krakow has a profound bond with Jewish culture as the area known as Kazimierz is home to the Jewish fraternity since the 14th century and the trials and tribulations throughout its history is well documented, in 1988 Janus Makuch inaugurated the JCF celebration and today the festival lasts 9 days with workshops, readings, tours and understandably stories from the Holocaust. The festival ends with the Shalom on Szeroka St. klezmer music concert. Enjoy some great Jewish cooking and carnival atmosphere.

There are 2 major sports events in Krakow for rugby enthusiasts, the early summer international Krakow Rugby Festival which takes place in the 3rd week in June every year has hundreds of rugby players arriving to enjoy a weekend of rugby 10s for both men and women. One of the main features in this ever popular rugby tournament is the unlimited beer & cider for teams during the entire weekend. The KRF attracts teams from all 5 world continents and the challenge is not only on the field of play as the organisers provide a full service with parties, pub crawls and other exclusive activities along with accommodation and freshly cooked meals. Then in the 1st weekend in September the Krakow 7s U.19 tournament which has youth teams both girls and boys mainly from European countries competing for trophies over 2 days. The 2 events are in conjunction with Ekstraliga side Juvenia Krakow RFC with a high standard of facilities and playing field.

One final festival of great tradition and gourmet importance is the fantastic and delicious Krakow Pierogi Festival. A 3 to 5 day event mid-August on a yearly basis staged on the smaller square, Maly Rynek next to the main square. The Polish pierogi are second to none as any Polish person will proudly tell you. The common translation for pierogi is dumplings, however, they are more like Italian ravioli in shape and form plus filled with a variety of fillings such as meat, vegetables, cheese, fish and fruit, they can be prepared by frying, baking or boiling. All participants both local and national compete to win the coveted St. Jacek Pierogi Trophy with some unusual recipes presented for tasting by the judges and the general public. Some say that the pierogi was the forerunner to ravioli as the wife of King Sigismund I of Poland, Queen Bona Sforza from Italy introduced them to her country of origin way back in 1518. Go for a pierogi dish as main course then a pierogi dessert with whipped cream washed down with a locally crafted ale and you will certainly want to repeat it the next day.

Last but not the least- if want to attend any of the above mentioned festivals it’s most convenient if you are accommodated in the centre of historical Krakow. Depending on your budget and group size there are many good hotels to stay at, but for a group travel a place which stands out combining good price and excellent standard with top notch location is the Draggo House Krakow hostel and apartments in Golebia 6 street – literally just off the Krakow Main Square