In the footsteps of World War II in Warszawa

Home /Destinations/In the footsteps of World War II in Warszawa 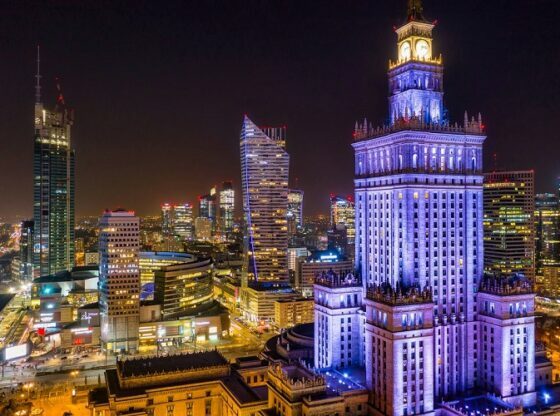 Warsaw has a difficult history behind it. During World War II, it was destroyed four times. To this day, you will find hundreds of places and monuments commemorating the fight for freedom and independence. Together with our Polish travel agency, we will help you find these places. Get ready to travel back in time!

The Warsaw Uprising Museum is a unique place that helps to understand contemporary Warsaw. It commemorates the uprising from 1944 – the biggest underground military action in German-occupied Europe during World War II. The exhibition shows everyday life and fights during Nazi occupation and the fate of the insurgents during communist regime in People’s Republic of Poland (PRL). The museum has gathered 30 000 exhibits. The exhibition is very modern and uses the newest audio-visual technologies to successfully reach nowadays audience. It is located at 3 stories and it has more than 3000 m2. Ending the tour, it is worth going to the Freedom Park, located right next to the museum. There is a Remembrance Wall with nearly 11,000 names of soldiers killed in the Uprising. What is more, you can admire the insurgent murals, made by famous Polish artists on the “Wall of Art”.

Tomb of the Unknown Soldier

The Tomb of the Unknown Soldier is a monument commemorating the nameless soldiers who gave their lives for the country. It symbolizes the greatest sacrifice. In the centre of the monument there is a grey stone slab with the inscription “Here lies a Polish soldier who died for the Homeland”. In front of the monument, soldiers from the Representative Battalion of the Polish Army are on guard around the clock. Every Sunday at 12.00 in front of the Tomb there is a ceremonial changing of the guard. Significant state ceremonies are also held here. Behind the Tomb lies the picturesque Saxon Garden, which was the first park in Warsaw opened to the public. The park is also one of the oldest parks in Poland.

The Pawiak Prison Museum is a special place in history Warsaw. It commemorates the activity of the Pawiak prison during the German occupation in 1939–1944. Located in the very centre of the city, the prison was witness to mass murders. It is estimated that about 100,000 prisoners passed through Pawiak, of whom nearly 37,000 were shot, and about 60,000 sent to concentration camps and forced labour. During the tour you will see five cells, including quarantine and death cells, reconstructed according to drawings, descriptions and accounts of prisoners, as also original equipment, poems, diaries, secret messages, calendars as well as various small items made by prisoners. In the courtyard of the Pawiak Prison Museum, there is the Pawiacki Tree Monument. Around the tree, the victims’ families placed plaques commemorating the victims of the Pawiak prison during the German occupation.

Mausoleum of Struggle and Martyrdom

The Mausoleum is a branch of the Pawiak Prison Museum. It is one of the best-preserved sites of the German Nazi execution of Poles in Warsaw. People were brought here from the Pawiak prison or arrested by the Gestapo during actions against the Polish underground or in street round-ups. Every day, up to 100 people were interrogated here. In order to extract a confession, inmates were interrogated using sophisticated torture. For dozens of prisoners, the interrogations in Szucha ended with permanent disability, and many were tortured to death. During the Warsaw Uprising, the Germans carried out mass executions of Poles here, whose bodies were then burnt in nearby buildings and in the square at the intersection of Aleje Ujazdowskie and Aleje Szucha. The museum was established by the initiative of former prisoners and residents of Warsaw as a place of national remembrance. The most valuable exhibition in the museum are the premises of the Gestapo detention centre located here during World War II, corridors, collective cells, isolation rooms and the room of the Gestapo officer on duty, where interrogations took place.

The Warsaw Citadel occupies a special place in the history of Poland, being one of the most important testimonies of the struggles and suffering of the Polish nation in the era of partitions. It was a control and pacification point for the whole of Warsaw, which was the centre of the Polish independence movement. It also served as an investigative prison and the execution site of Polish national activists and revolutionaries. Several hundred of them were executed, and thousands were deported to heavy labour in Siberia. The Katyn Museum is located in the Citadel. The museum is dedicated to the memory of over 21,000 Polish officers and prisoners murdered in the spring of 1940 by the Soviet political police of the NKVD.

A trip into the past

Of all the wars that swept through Polish lands for a thousand years, the last one – World War II – had the most destructive character, both in terms of material and population. A tour in the footsteps of World War II in Warsaw is a living history lesson. Our trusted travel partner, ITS Poland – Polish travel agency will help you plan such a trip. It is an ideal proposition for schools and history lovers.