Fly Reel Backing: The Best Insurance For Reeling In That Great Catch 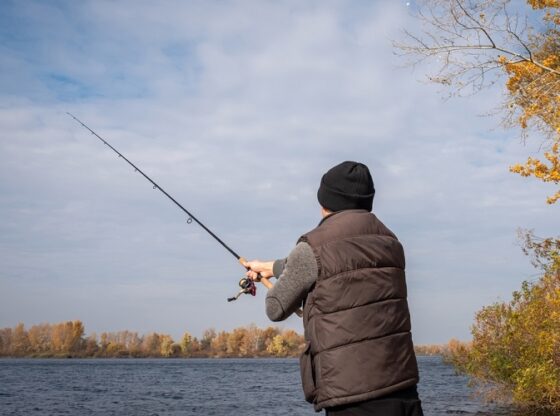 One of the worst feelings in fishing is knowing that you’ve got an amazing fish on your line – but you’re running out of line.  When a fish is hooked, it’s going to try to get away,  and that means watching your fly line spin out.  Do you have enough to keep up with the fish?  If not, it’s probably going to get away.

The solution to this is fly reel backing, also called fly line backing.  Whatever the name, it’s a form of extra-strong line which attaches to the end of your standard fly line, giving you extra line when fighting those particularly strong or fast fish.  It’s a must-have for any aspiring angler and can prevent a whole lot of heartbreak.

Why You Need to Use Fly Reel Backing

I.  How Is Fly Reel Backing Different From Traditional Lines?

At its most basic, fly line backing is simply more line that gives you a lot more leeway when fighting a fish.  However, it’s not made of the same material as your traditional line.  It’s built to be heavy-duty, and reusable for a long time, allowing it to stand up to the stresses that come with prolonged battles.

There are two materials that are most common for fly line backing:

Dacron, the brand name of polyethylene terephthalate, is the most common option.  It’s a synthetic plastic found in a huge range of products, everything from clothing to water bottles.

Dacron line backing is relatively affordable and sufficiently strong.  However, it’s the thicker option, so less of it will fit on most standard reels.  It’s generally only good out to around 300 meters, although that’s plenty for typical river and lake fishing.

Also, you should be aware that Dacron is bad for the environment if improperly disposed of.  It’s one of those “forever plastics” that never degrades.  So, if you choose to use Dacron backing line, always retrieve your line and dispose of it responsibly.  Never leave it behind or let it get lost in the water.

The other common option is gel-spun poly backing, also known as ultrahigh molecular weight polyethylene or UHMWPE.  This synthetic material is used in extremely high-stress applications, such as airbags and body armor, and it has significantly higher durability than Dacron.  In addition, it’s thinner than Dacron, so more of it can fit onto a reel.

However, as you might imagine, it’s significantly more expensive than Dacron.  The main reason to use gel-spun backing is if you’re going to be fighting particularly strong fish or expect them to need more than 300m of line.

So, for most amateur and mid-tier fishers, Dacron is good enough.

A typical reel is only going to hold around 90-110 feet of line, and that includes the line used casting in the first place.  So once the fish bites, you’re probably only going to have around 60-80 feet of line left.  Unless you’re only fishing for small fish like pan trout, this can run out quickly.  Plus, if you’re river-fishing, the current is going to naturally pull the fish downstream as you try to reel it in.

So, in most cases, fly line backing is a very good idea.  Think of it as an insurance policy.  You don’t want to run out of line when fighting your best catch of the day!

III. Where and how do you attach fly reel backing?

This part is straightforward.  The fly line backing should be the first part of the line to go onto the reel, with your regular fly line then attaching to the backing.  This ensures it’s correctly in place to come out when you need it.

The best way to attach fly line backing to the reel is with an arbor knot, which is just a couple overhand knots that turn into a slip knot.  When attaching your regular line to the backing, use a nail knot, since those add a lot of extra ‘grip’ and ensure the fly line won’t come loose in the heat of the moment.

IV.  How much fly reel backing do you need?

Honestly, as much as your reel can hold.  Since backing line is typically sold in large amounts, there’s not much reason to hold back.

However, there’s one caveat: you don’t want so much backing line on your reel that it touches the reel frame.  Otherwise, the frame can potentially damage the backing line as it spins.  You’ll want to leave around 1/4″ clearance, to ensure the reel can still spin freely.

Keep these tips in mind the next time you’re out on the water, and keep practicing your knots, and you’ll have a superior line that’s capable of catching even the biggest or fastest of fish.

Kampong Gelam Singapore, An Interesting Islamic Tourist Destination
How To Transport Your Boat With Minimal Hassle