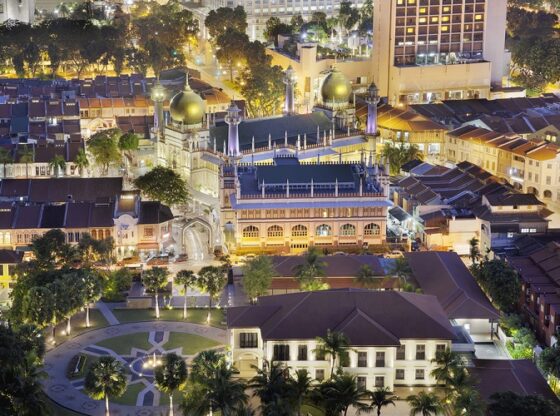 Singapore tourism is great. It can be proven by the way its country improvements in handling tourist objects that are not half-hearted, handled seriously and do not do mark ups. Because they know that improving tourist destinations will boost foreign tourist visits.

There are also many hotels provided in Singapore, one of which is Hotel Boss which is not far from a unique tourist location that will be discussed.

Hotel Boss is located not far from the Malay Heritage Center (Istana Kampong Gelam) which is a must-visit location for Muslim tourists.

In this place, you can find various interesting and beautiful tourist attractions.

GETTING TO KNOW KAMPONG GELAM IN SINGAPORE

Although this mosque is in Singapore, the first people who built the Sultan Mosque were Javanese. He came to Singapore aiming to trade with the Arabs and Bugis in 1826 ago. Since its inception, the congregation in this mosque has also increased from year to year.

That is why the Sultan Mosque was rebuilt at the same location in 1942 and completed in 1928. Interestingly, the architecture of this mosque building was made in the Mugal Gothic style which was previously made in the Indonesian style.

If you walk around Kampong Gelam, you will see a restaurant located at the corner of Bussorah Street. Many Muslim tourists who come here because the food is halal, Kampong Gelam Café also serves a cheap menu.

Even those of you who want to stay up late can come here, because Kampong Gelam Cafe is open until 2 am. Meanwhile, the types of food that you can try here are Malay foods such as boiled noodles and nasi lemak.

As in general, food in Singapore still has a taste similar to Indonesian food. You also don’t need to be afraid to walk here at night because this place is always crowded with visitors even until the early hours of the morning.

For those of you who claim to like hanging out, it’s not legal if you don’t visit Haji Lane. This place is known as one of the favorite gathering places for young people in Singapore.

Visiting this place, you can find lots of boutiques, knick-knacks to tattoo-making places. Haji Lane is also known as an okay spot for taking pictures because there are lots of cool, Instagramable murals along the walls. You can have a keepsake by taking pictures and posting them on social media.

Kampong Gelam became the residence of the nobility of Malay origin during the 19th century. Kampong Glam Palace is a witness to the history of the Sultan of Johor who lived here.

Kampong Glam Palace is an example of a blend of Malay and British architecture at that time. Inside this building is the Malay Cultural Heritage Center which is included as one of Singapore’s national monuments.

This place is a very famous place to eat in the Kampong Gelam area. The location of Singapore’s Zam-Zam is also not close to the Sultan Mosque. One of the favorite food menus for visitors here is murtabak which is the same as martabak in Indonesia. The martabak that are sold are also varied and the contents range from those containing beef, chicken to deer meat.

Did not think that in Singapore you can enjoy a place that is thick with Islamic culture. In addition to staying at Hotel Boss, you can choose from many existing Hotels in Bugis. Of course, you can directly book the location of your destination hotel through the Traveloka application and website!

4 Easy Steps to Planning a Camping Trip
Fly Reel Backing: The Best Insurance For Reeling In That Great Catch