5 Tourist Places to Visit in Agra 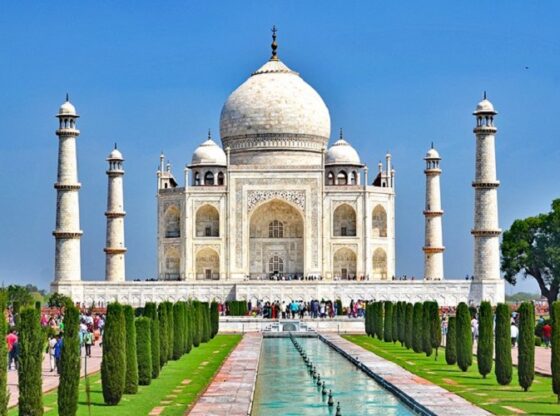 Agra is one of the most popular destinations and it is an important place in history. People think that Agra is just for Taj Mahal. But it is an enthusiast place. There are lot of architectural structures to enjoy. Agra is a colour full place. Agra is situated in the state of Uttar Pradesh and gets the most amounts of tourist every year. If you want to look at the real colour of India, visit Agra during any festival.

There are some tourist places to visit in Agra which we mentioned below.

Undoubtedly Taj Mahal is of the most popular Historical monument in the world. And it is counted in one of the seven wonders in the world. It was built by Mughal Emperor Shah Jahan in the memory of his third wife, Mumtaj Mahal, who died in 1630. The construction of Taj Mahal begins from 1632 and end in 1648. It took over 16 years to complete. It is made up of white marble. Million of people visit to see the Taj Mahal from all over the world. Its beauty attracts the tourists. So everyone must visit in this historical monument.

Agra Fort is a historical fort and it is situated at Agra, India. This fort is spread over 94 acres and it was constructed by the great emperor Ashoka in 1565. This fort is listed among the world heritage site by UNESCO and the fort is made up of red sandstone. There are more than 500 buildings inside the fort. and it was close to Taj Mahal. There are some well known sites within the Agra fort are Diam-i-Am, Diwan-i-Khas, Anguri Bagh, Khas Mahal, Pearl Mosque, Naubat khana, Golden Pavilions and Jahangiri Mahal. Everyday thousand of tourists visit and its beauty attracts the tourists. So everyone must visit in this historical monument.

Fatehpuri Sikri is one of the most popular historical place in India and it is located in Agra, Uttar Pradesh. It was built in 1571-1573. Many womens would come to tomb of the Sufi Saint Salim Chisti to pray for children. It is 54 metre tall. Buland Darwaaza that was built here to commemorate the victory. The attracted thing of this historical monument is Buland Darwaaza. This Fatehpuri Sikri is also known as a ghost town . The visiting hours of this monument are between the sunrise and sunset and it open on all days of the week. Entry fees for Indian is Rs 35 and entry fees for foreigners is Rs 550. So everone must visit in this monument.

Itimad-ud-Daulah Tomb is situated at Agra, Uttar Pradesh and it is also known as Baby Taj. It is made up of white marble, which influenced the design of Taj Mahal. This tomb was built under Nur Jahan. Every surface of the structure is decorated with motifs of flora and Geometric structure. This tomb was constructed in 1622 and it is located on the western bank of Yamuna river. Everyday thousand of tourist like to visit in this tomb and Agra is one of the most beautiful attraction among tourists and the timings are 6.00Am to 5.30 Pm so plan according to time.

Plan your trip and book the Palace on Wheels train online for this season.